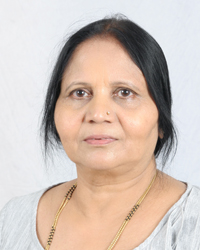 Kusuma G Rao, a Doctorate in Atmospheric Sciences from Department of Aerospace Engineering, Indian Institute of Science (IISc), Bangalore is currently the Director of IARSc, Bangalore. She is Research Advisor at Cochin University of Science and Technology (CUSAT), Kochi. She was holding Adjunct Faculty position at Space Physics Laboratory, Vikram Sarabhai Space Center, Trivandrum, India during 2008-2012 while she served Indian Space Research Organization for Space Sciences and Atmospheric Science Programme.
In the last 30+ years of her career, Dr. Kusuma has made fundamental contributions in furthering our understanding on the monsoon boundary layer turbulence. She has proposed novel definitions of the drag and heat exchange coefficients in terms of the new heat flux scaling laws; and a new parameterization scheme for surface transports from both the land and water surfaces for use in numerical simulations of monsoon climate and weather systems. She has extensively worked for a national project, MONTBLEX (MONsoon Trough Boundary Layer Experiment) while at IISc, Bangalore & JNCASR, Bangalore (Jawaharlal Nehru Center for Advanced Scientific Research) with several publications in national and international journals. She visited USSR Academy of Sciences to develop collaboration in Atmospheric Boundary Layer modeling for the Indian summer monsoon as part of the ILTP program in science between India and USSR.

She was responsible for initiating Mesoscale Weather Prediction programme, “PRWONAM” in ISRO (Indian Space Research Organization), Bangalore. She was pivotal in creating “Operational Weather Prediction System” at SDSC (Satish Dhawan Space Center), Sriharikota, a system being in use. She supported several ISRO satellites launches from Sriharikota under PRWONAM project with accurate weather predictions. She was a member of the Weather Forecasting Expert Team of ISRO. She was instrumental in designing the micro-meteorological network of 50 m high instrumented towers and 15 m high Mini Boundary Layer Masts (MBLMs); and in setting up of National Observing Network of Instrumentation in the Country with towers, micro-rain radars, masts, GPS Radiosondes, Soil moisture sensors and Soil temperature probes, etc.

She was at the Laboratoire Meteorologie Dynamique, Palaiseau, Paris, France and at Hydrospheric Atmospheric Research Center, Nagoya University, Japan to carry out pre-launch studies related to ISRO Satellite mission ‘Megha-Tropiques’. She was involved as Chief Scientist in a major project GEMSS of ISRO (GPS based Experiments for Meteorology and Space Sciences) and in CAWSES-India programme (Climate and Weather of Sun-Earth System).

She was an Invitee to the Report Meeting on the Joint Research Project on Environmental Technology between NMRF/ISRO, India and MOPT/CRL, Japan held at Communication Research Laboratory, Tokyo, Japan in the year 1998 and to the International CLIVAR Monsoon Panel meeting during 1997 at Kyongju, Korea. She was the Chair person for the Session on Atmospheric Forcing and Mixing during the MST-11 (International Workshop on MST Radars) in 2007. She was member of the Programme Committee, Scientific programme on INTAR (International Network of Tropical Atmosphere Radars), 2005, and Convenor of the Programme Committee for the 3rd Indo-French Workshop on Megha-Tropiques under the ISRO-CNES Programme on Atmosphere, Climate Science and Oceanography, India. She was invited to Chair two Scientific sessions during COSPAR-2004.

She was on the Scientific Advisory Committee of National Atmospheric Research Laboratory, Gadanki, India as a member (2003-2007). As member, she was responsible for ADCOS (Advisory Committee for Space Sciences) Panel on Climate and Weather Science, ISRO, India.

She served WCRP (World Climate Research Programme), as a member from India, on the International SPARC Scientific Steering Group (SSG) during 2012-2015. She is currently Member of the Executive Committee of the India Meteorological Society, Bangalore Chapter.